2016 marks 38 years of the Houston LGBT Pride Celebration®, the OFFICIAL Pride of Houston.

It will again be in DOWNTOWN HOUSTON. City Hall in Downtown was where the event that is widely know as Houston’s own “Stonewall” occurred in 1977, as thousands protested against Anita Bryant.

Rise up. Be seen and heard, because today we celebrate love! 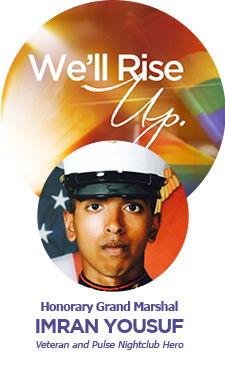 Bring your #glowsticks or flashlights, and shine your light to the world!

Honorary Grand Marshal Imran Yousuf will be present, along with a rainbow flag honoring the Orlando victims. The parade begins at 8:30PM, and concludes around 11:00PM.

Parking is available at all open downtown garages and lots. Learn more at: http://bit.ly/1trs81V